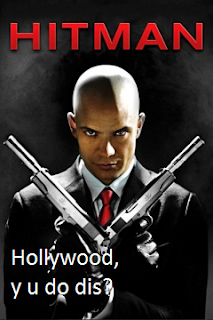 It often seems like games are more than ripe for adaptation into film. They often feature complex stories with large casts of characters, a lot of action, distinct visual flair, and intriguing plotlines. Not all games, of course, but you can normally expect at least some of these things.

And yet... almost without fail, movies based on games fail. Tragically. And it's a real shame. Aside from the inevitable disappointment that a fan of the game ends up feeling, it gives our non-gaming brethren a mistaken impression that all games are banal, braindead affairs with little to offer culture as a whole.

I'm not talking about the likes of Tomb Raider and Doom, both of which are fairly generic though competent action flicks based on fairly generic though competent action games. It's okay to make a dumb action movie about a game if the game itself doesn't have much to it. We expect that. Although, in the case of Doom, the film did some how manage to mess up what little plot the game had to begin with.

The problem is when movies are made based on games that have so much potential to actually be used for powerful film-making, and instead we get... generic action flicks.

Let's talk about Hitman. In the game, you play Agent 47, a clone, bred and trained from his creation to be a ruthless killing machine. Over the course of the franchise, we see 47 try to come to terms with this darkness inside himself, with the fact that he was essentially bred as nothing but a monstrous tool to be used to profit from death. He tries to reform himself in Hitman 2, but is forced against his will back into a business he had wished to exit.

We can see here what could be a dramatic and interesting psychological thriller about a man trying to overcome his own innate evil and find redemption. Perhaps a hint of a discussion on the ethics of human cloning, or on human nature itself.

The gameplay in Hitman is focused around using your guile to slip past enemy guards and take out your target without being detected. So we could have tense, subtle action scenes of infiltration with occasional high-impact violence when 47 comes to his target. We could have these things.

Instead, what we got was a generic action flick, and quite a poor one at that. It represents a serious misunderstanding on the part of the filmmakers both of what the game was actually about (Hint: It was more complicated than 'have fun killing people for money') and on what the fans of the game want, who gamers are. We are not 13 year old boys who just want to see some cool action scenes. We are, largely, mature, thinking adults who engage with our entertainment on an intellectual and emotional level as well as a kinetic one.

But instead, we get the movie we got. A bad PG-13 action flick, replete with unnecessary nudity and some silly fight scenes that were choreographed so that the kiddies in the audience would think they “looked cool”. And the rest of society, who doesn't play these games, looks at these films and thinks that that's all games are, and that that's all gamers want to get out of them, and it perpetuates the false notion that gaming is necessarily banal and immature and worthless as an actual art form. I recall hearing one review of the Hitman film where the reviewer observed that the movie was evidence that what makes a fun game doesn't really make a good movie.

Actually it was evidence that the people making the movie had no idea what made the game good.

The Max Payne film falls into a similar pitfall. Here is a tragic, layered film noir story about revenge, addiction, paranoia, love, friendship and betrayal. It may not have been the most original story in the world, but it was interesting and nuanced, carried by a dark, brooding style.

And, again, we get a generic action movie that pays lip-service to some of the plot-points and themes from the games without really understanding them, and that takes the game's subtly dark style and presents what comes off as an outlandish mockery. A satire, maybe, on the stylistic tropes of the film noir genre. Although I'm sure that wasn't what the filmmakers intended.

It's not about games not being able to provide good fuel for films. It's about the people making the films being terrible at their jobs and believing the stereotypes about gamers as an audience instead of actually understanding them, as well as taking a very superficial view on the games themselves, if they even played them.

So, when can we have a good video game movie? When we get a writer and director that are themselves gamers, maybe, and that understand not only film, but also games, and what makes them engaging.

Until then, Hollywood, please, can you just stick to making movies based on games that actually are little more than one-dimensional shooting galleries? Thanks.
Posted by Troubletcat at 7:07 PM