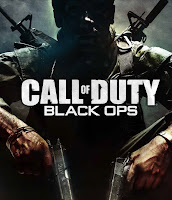 Ahhh... Call of Duty, how I love/hate you.
As I've already complained in that old Clone Culture post, the Call of Duty franchise, to me, epitomises a lot of problems with gaming today, or more specifically, the games industry. A stream of game-a-year sequels that are barely different from each other, perpetuating a style of gameplay that – while enjoyable – greatly offends my hardcore sensibilities.
So anyway, I've spent the last week playing Black Ops (Both single-player and online – I'm reviewing the online component first as it's probably the reason most people bought/are buying the game) and I have to say, despite the vomit-inducing hunk of stinking crap that was Modern Warfare 2, and, more relevantly, Treyarch's ABYSMAL Call of Duty 3, Black Ops actually does a lot right, and points the series in a good direction.
Now if only they would stop making these fucking games.
Story, Setting, and Characters

Hahahaha, jokes, this is an MP review. I'm not seriously going to complain that the “story” (a bunch of apparently super-human special forces guys kill each other a lot?) is underdeveloped.
Although it totally, totally is.
Presentation
This is the fourth game built on this engine, which originally appeared in Call of Duty 4 at the end of 2007, and it's really starting to show it's age. What's more perplexing is that it actually looks noticeably WORSE than last year's Modern Warfare 2, and performs worse across the board, with the biggest problem being on PC. I didn't buy the PC version because, despite the lack of improvement in graphics, the minimum requirements sky-rocketed and performance, inversely proportional, even for people with monstrous rigs (which, I remind you, mine is far from).
So that's kind of an epic fail, but don't get me wrong – it's not like the game looks terrible, there's just nothing remotely impressive about the engine that blew minds back in 2007 any more.
The sound in the game is adequate – actually pretty good, although I feel like some of the weapons don't sound quite right, especially the really big or powerful guns – they just sound a little weak, or maybe just a little too quiet. The resounding BOOM of the high-calibre bolt-action sniper-rifle in the game feels a little weak, for example. Niggling issues aside, the sound design is solid across the board, but I can't really say it's anything special.
A dramatic score provides a suitable accompaniment to key moments, such as the ends of games, and does help to add a little more tension and get your heart pumping, while being unobtrusive enough that it doesn't distract you from the action when you really need to focus.
Gameplay
This is where things get serious. There are a lot of major differences between Black Ops and other games in the Call of Duty franchise, both in the meta-game and in the core gameplay. I'll start with the meta stuff. 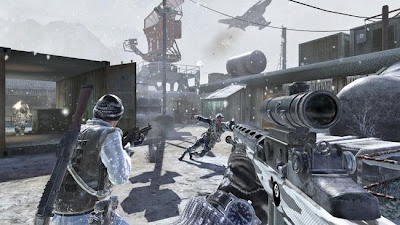 The meta-game in Black Ops is the most refined we've seen yet, and it works really, really well. There's only fifty levels this time around (which you'll probably get through in twenty-something hours) but there's a full 15 levels of prestige, each with new unlocks. In addition to experience levels, there are now also “CoD Points” which is basically in-game currency earned from playing the game and doing well. You use these points to purchase killstreaks, weapons, attachments, camouflage, facepaint, weapon customisations and perks, and I actually think this adds a lot to the game. You don't really make enough points to purchase everything in the game on a give run through the ranks, so if you intend to keep taking more prestige levels, you have to think about what weapons and gear you want to buy.
It also does away with having to complete annoying challenges to unlock various weapon attachments which can make or break a class set-up, although you still have to unlock weapons by reaching a certain level before you can buy them.
There's a good variety of gametypes, mostly modes from other Call of Duty games, although there's now “Wager Match” mode which allows you to bet some of your CoD points for the chance of a high return in novel gametypes, including the ever-popular-but-still-stupid Gun Game, and also a new Barebones mode which features standard gametypes without perks, attachments or killstreaks if that's your bag.
I do kind of wish they had added a completely new core game mode, but there are honestly quite a few already, and it's a minor complaint.
There IS something kind of new in the “Combat Training” mode which allows you to play against bots. It's actually pretty good if you just want to practice a bit without the pressure of online play, or if you want to try out the game with some friends who aren't regular gamers.
Zombies, the other mode where you play against AI opponents, is moderately enjoyable, but doesn't really have enough substance for me to spend a lot of time on it – won't say anything else about that, but it is worth noting as a fun diversion.
As for how the game actually plays, well... it hurts to say it in a way, but it really plays very well. Treyarch have looked at the complaints about the series – especially from the hardcore market – and corrected a lot of serious issues with balance and with how the game plays. It takes more bullets to kill somebody, and explosives are much less powerful – these are the two most immediate differences. Both of these things result in Black Ops feeling like much more of a skill-based game than it's predecessor, and somewhat more akin to Call of Duty 4.
Killstreaks and Perks are also quite well balanced. The end-tier killstreaks are still pretty game-winning, but kills from killstreaks no longer progress you towards later ones. So yes, the 11-kill attack dogs are extremely brutal, but those eleven kills have to be earned with your normal weapons, not through and airstrike and a helicopter.
The perks are even better. The perks that pretty much everybody used to use are either completely gone, or reduced in effectiveness, with some other perks made a bit better. All in all, the perks are all roughly as good as each other, and as a result you do see a lot of variety in people's loadouts this time around, as well as occasionally having some pretty tough choices about which perk you should take with a certain class yourself. 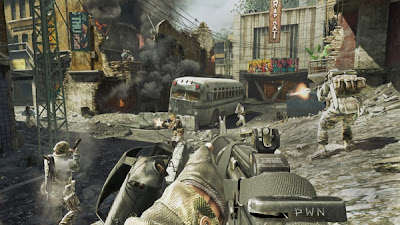 There've been some changes to the general layout of your equipment, in that, firstly, you now have an “Equipment” slot in addition to three perks, two weapons, and two grenades, which can hold various devices including explosives, a portable radar jammer, and a static motion sensor. This means that you now see more use of these odds and ends as you no longer need to sacrifice grenades or a perk slot in order to get them, which I think is a good thing and adds a little more interest to the game.
There's also less variety in terms of secondary weapons – there are a few launchers, a bunch of pistols, a crossbow, and a special long-range knife. No more secondary shotguns.
There's also no more gratuitous dual-wielding and silencers everywhere. You won't see silenced pump-action shotguns, or silenced heavy machineguns, and you won't see people dual-wielding high-calibre sub-machine guns. All in all, a lot of the stuff that was really annoying in MW2 has been corrected or removed.
Verdict
Black Ops is a very solid game, much better than MW2, and maybe even better than Call of Duty 4. As much as it pisses me off that Activision can release the same game every year and make hundreds of millions of dollars every time, it's debatable how much that really matters if the games are good and continue to entertain.
If you're dead tired of Call of Duty, Black Ops probably won't turn it around for you, but if you're on the fence, I really do recommend Black Ops. It does a lot right and is a much, much more enjoyable game than MW2 for a whole lot of little reasons.
If you're a hardcore fanboy, you already have the game, and you obviously don't care what I think, so screw you, or something.
Posted by Troubletcat at 4:00 PM